When Is The Release Date For Kanye West’s ‘Jesus Is King’ Album?

After months of delays and last-minute changes, Jesus Is King is still unreleased. Kanye West’s highly-anticipated album was set for release on Sunday, September 29, but the release date came and went without new music. We will provide details and live updates as they are made available.

West has had a long history of subverting normal album roll-outs, so the delay comes as no surprise. Based on what he’s done in the past, fans were expecting to hear Jesus Is King after the New York listening session on Sunday night. The session started at 8:30 p.m. EST at Manhattan’s United Palace. West has hosted several listening sessions over the years, and each time, the given album has been released afterwards. This was not the case with Jesus Is King.

People are reading this now:

‘Jesus Is King’ Has Missed Its Sunday Night Release Date

West’s wife, Kim Kardashian, has issued a statement that confirmed the album’s release plan. “Kanye’s doing a listening session in Chicago tomorrow, then NYC Sunday,” she wrote on her Instagram story. “He’s dropping the album Sunday. Just a few final tweaks to the mixes.” She also released an updated tracklist, which includes features from Young Thug, Clipse, and Lauryn Hill.

West has been hosting listening sessions all weekend long, first in Detroit and then in his native Chicago; so it stands to reason that the session in New York City will follow a similar pattern. Attendees will be treated to a front-to-back listen of the album, which is ten tracks and roughly 35 minutes in length. They will also be treated to previews of two film projects.

Neither West Nor Kim Kardashian Have Addressed the Delay

The first is a mini-documentary titled Jesus Is King, which focuses on West’s attempt to create affordable housing in Calabasas. The second is an untitled film about the rapper’s music. “The second video we saw was basically an extended trailer for his movie coming out in October,” said attendee Danielle Bennett. “I think it’s a film about the Sunday Service rehearsals, but that’s the only thing we saw of that.”

Bennett also weighed in on the musical content of the album. “The entire album was not strictly about Jesus, but it was an ongoing theme throughout,” she told Complex. “Some songs focus more on spirituality and religion, and some were more lighthearted and geared toward a wider audience. Some tracks had a more classic Kanye feel, and some had a Sunday Service feel.”

West Originally Planned to Release the Album on Friday, September 27 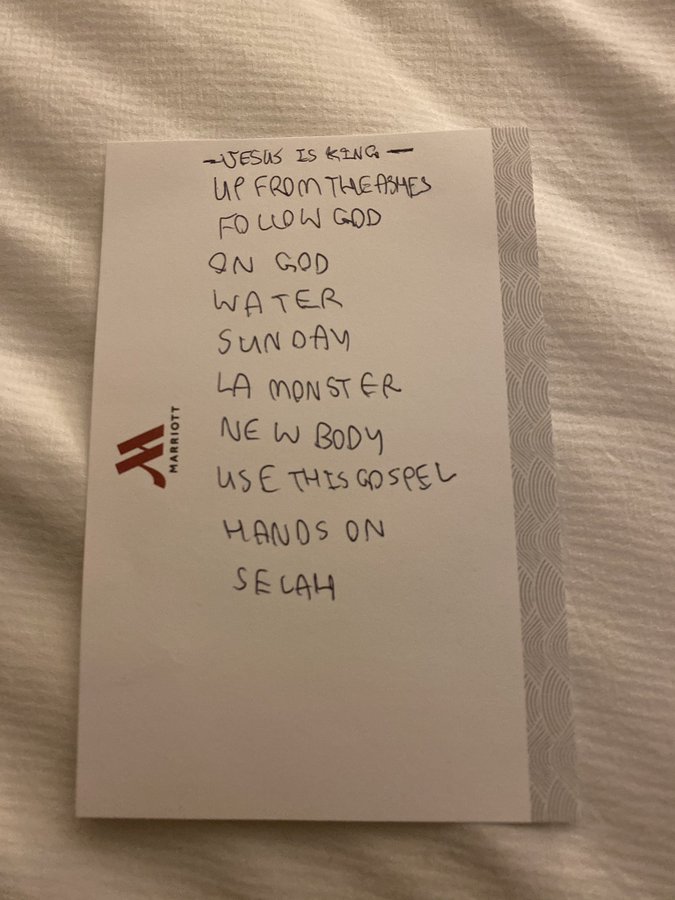 18.6K people are talking about this

Bennett noted that the album lacks the explicit lyrics of West’s previous releases. “I don’t remember there being any vulgar lyrics, which is definitely a first for him,” she remarked. “I think the entire album really represents this transition he’s gone through from being angry and struggling with his mental health to finding God and becoming a new person.”

Generally, albums become available around midnight EST on platforms like Apple Music and Spotify. This has been the case for other high profile artists like Drake, Jay-Z, or Beyonce. That said, there’s still hope that fans will get to hear the album sooner than later.

While his 2018 solo album Ye and his collaborative effort with Kid Cudi, Kids See Ghosts, were set for a midnight release, they were delayed by several hours. Both albums were debuted via listening parties, but they did not arrive on streaming platforms until the following afternoon. It’s possible that Jesus Is King will follow a similar trajectory.

What Is Your Talent, Business, or Project? Exhibit In THE LIGHT CONVENTION (TLC) 2021!

You Are Reading: What Is Your Talent, Business, or Project? Exhibit In THE LIGHT CONVENTIO…

Ravi Zacharias, Christian Evangelist and Defender of the Faith Dies At 74https://ijesusafrica.com/ravi-zacharias-christian-evangelist-and-defender-of-the-faith-dies-at-74/

Greetings iJesusAfricans here is an article from one of our May 2020 #iJAFaceofTheMonth contestant. #iJAVoices Believers Should Be Taught How To Develop Their Relationship With God, Not Ripped Off! Click on the link below to read more! #GospelinCameroon ijesusafrica.com/bel…

New Song By 'Christ T' Titled 'Back Up' Draws Inspiration From What Happens In Boarding Schools, Where Only Those With 'BACKUP FOOD' Survive! @christttherapprophet ijesusafrica.com/new…

"Shocking Truth Of How I Got Secret Powers As a Fake Pastor | I've Been Through The Most "| Ps Makhado ijesusafrica.com/sho…

Crisis Management | How To Survive & Thrive in Times of Crisis | Overcoming Seasons of Crisis – ijesusafrica.com/cri…

Valentine's Day Will Be The Best Ever If You Know This: The Truth About Love And Why Many Miss It ijesusafrica.com/val…

Official Atheist HOLY DAY: Did You Know It's On The Calendar? | Funny #Fact ijesusafrica.com/off…

"Why Are You Sitting On Your Gift"? Little Brother Dies After Asking "Bessem Arrey" - "I'll Praise and Worship You" Album Out Now!!! #GospelinCameroon #237Christian #GospelestBeau ijesusafrica.com/why…

Kanye West: Hundreds Dedicate Lives To Christ At Youth Conference After Kanye West Shares How Jesus Saved Him From The devil ijesusafrica.com/kan…

© Copyright - No1 most-visited Christian News and Entertainment website in Cameroon, IJesusAfrica.com is owned and managed by DOGi Innovations. Built by @Lekingson